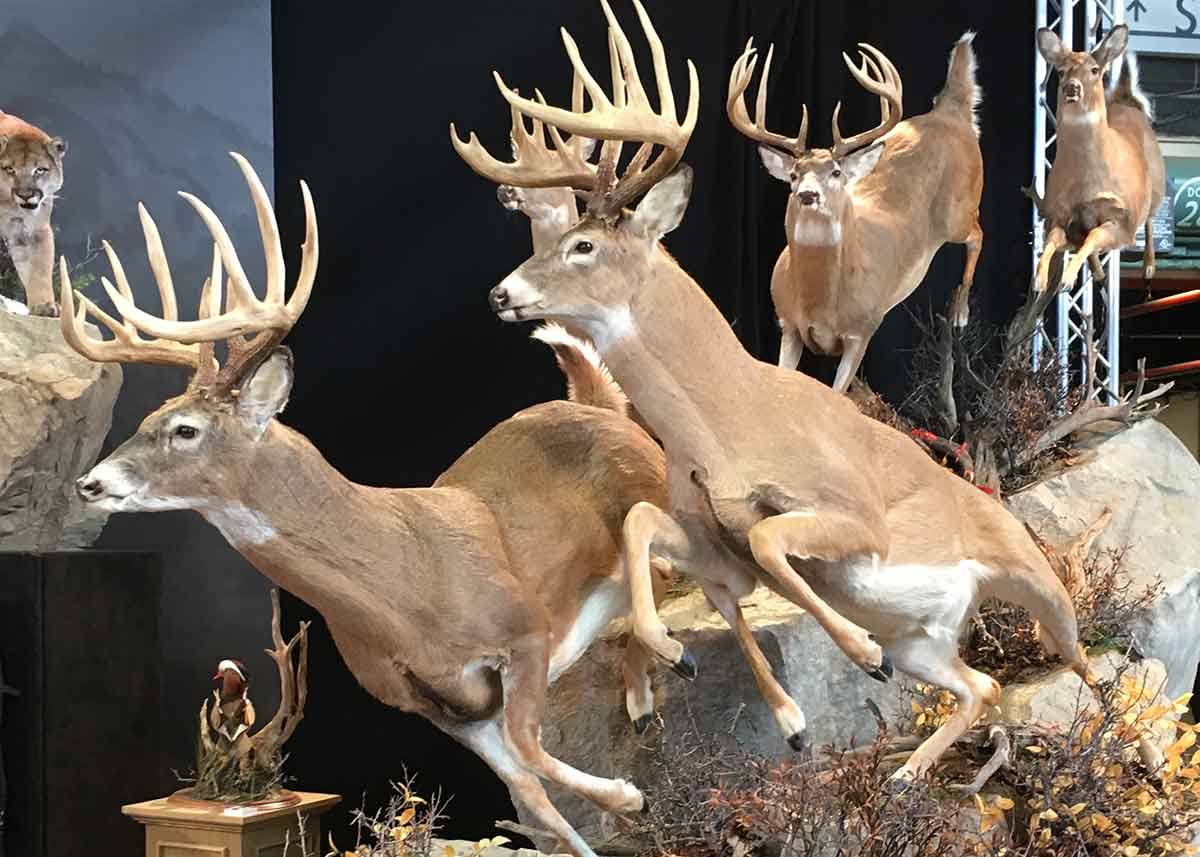 In six years working as a guide, he and his twin brother Gene helped more than 200 clients kill Pope & Young class deer with their bows. Their hunters had a 96 percent success rate overall.

Barry has personally killed four Boone & Crockett bucks, all with his recurve at less than 15 yards. And – in running six whitetail booth camps a year for 15 years – he helped countless other hunters fill their tags with big-racked bucks.

In short, he knows what it takes to put big deer on the ground.

And now he’s sharing his secrets.

Approaching his 75th birthday, Wensel – born in DuBois, Pa., raised in Vermont, a 30-year resident of Montana and now living in Iowa — recently released two new DVDs full of what he says are tips he never previously shared. Titled “Out and About,” they highlight trophy whitetail hunting techniques.

“They’re a different species,” Wensel said. “I call them the slow walkers. They keep by themselves. The rest of the herd just gives them respect.”

It takes real attention to detail to consistently kill them, he added.

A doctor looking at an x-ray will see much more than a layperson, he said. Likewise, the best big buck hunters look at a whitetail’s home and see what others miss.

“You need to think about what you’re seeing. Put the pieces together,” Wensel said.

He shared some of what’s in his new videos earlier this year at outdoor shows.

Here are six tips he offered.

Sneak in, sneak out

Every public land hunter has heard it: to find deer, go back in further than others are willing to walk.

There’s truth to that, Wensel said. But it’s more important than ever to be stealthy when you get there.

“One of the big secrets is hunting undisturbed animals,” Wensel said. “Most guys don’t think far enough ahead.”

That means playing the wind, of course. He approaches his stand only from downwind and even takes pains not to skylight himself or otherwise make himself visible.

But he takes things one step further.

When first hanging his stand, he takes a garden hoe into the woods with him. He clears the last 50 yards to it of all leaves, taking things down to bare earth.

That allows him to approach silently, rather than as if he’s walking “on six inches of cornflakes.”

“It’s a night and day difference as far as entrance and exit,” Wensel said.

Deer and old-time loggers have one thing in common: they prefer the path of least resistance.

Find an old logging road back in the woods, Wensel noted, and chances are it runs along a ridge top. That’s because it represented the easiest way for loggers to get equipment into the woods and timber back out.

Such roads are always full of deer tracks, too, he added. Whitetails find them easy going as well.

But, he said, deer – and wise old bucks in particular – use those roads only after dark. Otherwise, they travel on a parallel track, but one that’s on the downwind side of that ridge.

They can not only smell anything below them, thanks to rising thermals, but also smell anything uphill thanks to the direction of the prevailing wind, he said. And they can do it without skylining themselves.

The result is hunters who set up to watch the ridge edge, even on the downwind side, end up upwind of the deer they hope to see.

“How many times have you heard it? A guy says I was sitting there, and it was perfect, and the buck came in behind me,” Wensel said.

“Well, no kidding. Because that’s where he was supposed to be.”

He looks for that secondary trail, then sets his stand 15 yards downwind of that.

In days gone by, Wensel hunted from a tree stand that left him 33 feet off the ground. Twenty-two feet was his standard.

Indeed, two years ago, he killed a Boone & Crockett bucks just six feet off the ground. He hunts from another stand, a “killer,” that’s only four feet up.

The key, he said, more than height is camouflage.

“You want to surround yourself with density so the deer can’t see you,” Wensel said.

He does that two ways, one natural, one not.

Where legal, he “hinge cuts” three or four trees surrounding his stand. That means he cuts them – not all the way through – but enough that he can bend them so their tops contact his stand.

“It will quadruple your cover,” he said.

With luck, those trees will survive the cutting and continue to leaf out year to year. But if they don’t, he has another solution.

Wensel hits box stores, places like Goodwill and elsewhere after the holidays and buys old Christmas trees and, better yet, long strips of garland. One year, for example, he bought 52 6-foot lengths of garland. They normally sold for $5 each; he paid 52 cents per strip.

Woven into branches around his stand, they provide cover that usually lasts for years.

Wensel hinge cuts trees in another fashion, this time to direct deer.

“People ask me all the time, how do you get those deer so close all the time? I call it detailing,” Wensel said. “I manipulate the cover around my stand.”

What that means is this.

He prefers to shoot deer at no more than 15 yards. So, for example, if he determines one tree to be the best for his stand, but notices that the main trail deer are using to pass it is 25 yards away, he uses the cover to move them his way.

Specifically, he hinge cuts a tree to change where they walk. He makes his cut about four feet off the ground, then bends the tree on an angle. That’s critical.

If the bent tree is cut too high or too low, and laid perpendicular to the existing trail, deer will walk under it or jump over it.

But he angles it to send the deer where he wants them. To seal the deal, again with his hoe, he clears a new “deer trail” that leads around the tree – in the direction of his stand – for deer to follow. More often than not, they do.

“So you’ve shifted their movement to where you want them to be,” Wensel said.

Another trick Wensel relies on is to hunt “almost wrong” winds.

Rather than hunt downwind of the direction he expects a deer to come from, he hunts parallel to that direction, “giving the deer a false sense of security,” Wensel said.

There’s a trick to that, though.

In those situations – and again, this is something that may not be legal on public lands, he admits – he screws two lag bolts with eyes into a tree 15 yards from his stand. One goes 25 feet off the ground, another three.

He loops a length or paracord between them. Finally, he soaks a tampon or cotton rag in some kind of scent, like a doe in heat variety, and attaches it to the paracord with a paperclip.

That way, he can raise and lower it day after day, refreshing the scented rag as needed, like a flag on a pole.

“The scent will dissipate 10 times further than if you pour it on the ground or whatever,” Wensel said.

Most importantly, the wind carries it parallel to his own scent. The result is that approaching bucks hit that scent trail before his own and, properly distracted, often walk right in.

“Then you have to shoot you’re way out,” he joked.

Wensel has a deadly technique he uses in small woodlots, too.

Those are patches of trees 10 to 15 acres in size. They’re surrounded by large fields, with the next bunch of trees 500 to 700 yards away.

Whitetails hide in those places in a predictable way, he said.

Mostly, they bed in the southeast corner. That allows them to smell anything coming from one direction while seeing anything approaching from the other.

So he uses a partner to get them.

Before the season, he hangs a stand in that southeast corner. Then, when the season opens, he approaches it – on foot or better yet in a vehicle – with two people. He makes no attempt to be quiet or stealthy.

The deer, seeing them approach, typically run to the northwest corner of the woodlot, he said. They stop there, preferring not to go into the open field.

That’s what he counts on.

When deer halt, one hunter climbs into the tree stand while the other makes a show of leaving.

The deer see that and, in time, drift back to the southeast – where they wanted to be all along – and into range of the waiting hunter.

“We call it nudging,” Wensel said. “It works. It’s a deadly technique.”

Now, none of those tricks guarantee anyone a deer, especially a big, wily buck. But Wensel has the racks to show they do work, more often than not.

It’s all about paying attention and putting the puzzle pieces together.