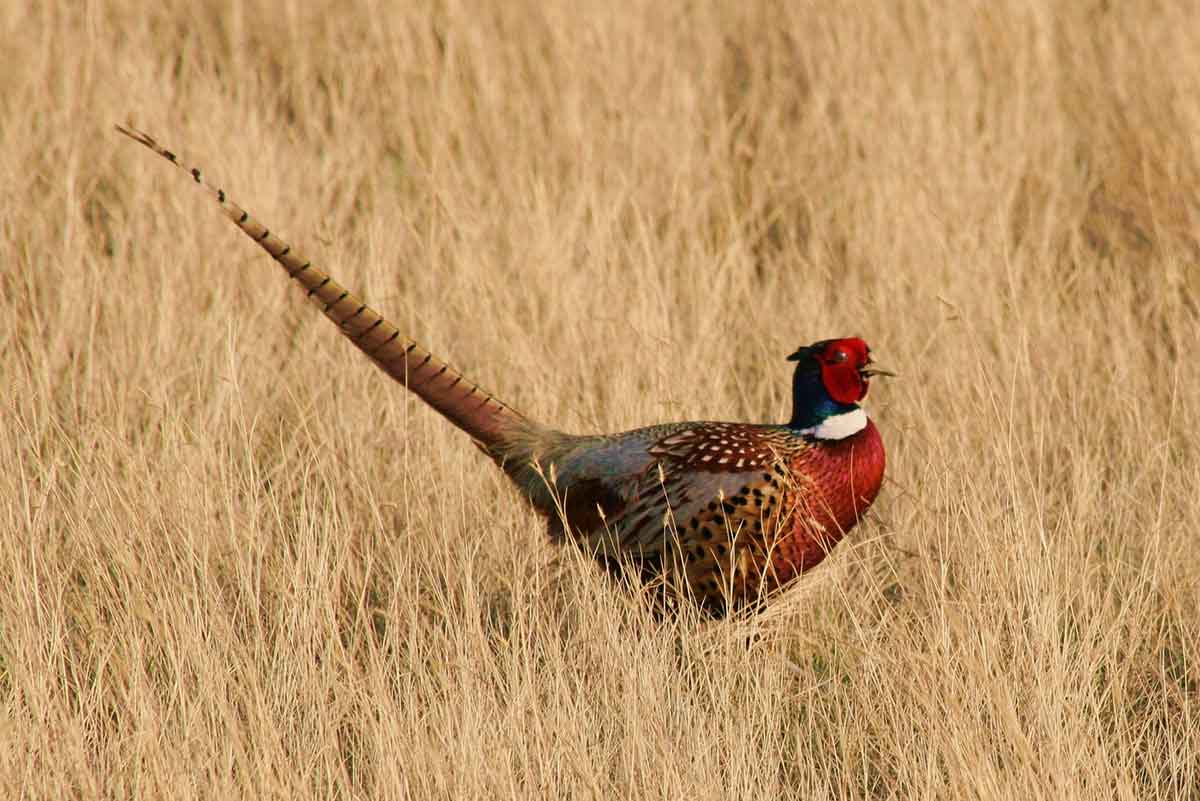 HUnting pheasants is a long-standing tradition in a lot of states.
Photo: Pixabay

Particular, that’s what ring-necked pheasants are.

They don’t require a lot of space to survive. Not on an individual basis anyway.

The average bird will live its entire life – usually, a span of less than 12 months – within one square mile. That’s just 640 acres.

But that country must be special.

Unlike, say, white-tailed deer, which seem to thrive under any conditions, pheasants are what wildlife managers call habitat specialists. They have definite requirements.

According to Pheasants Forever, that means secure nesting cover above all else. It should be made up of diverse grasses, lie undisturbed at least some of the year and offer protection from predators attacking from the ground and the air.

Seen a lot of those lately?

Yeah, me neither. The kind of country pheasants prefer continues to shrink nationwide.

The U.S. Department of Agriculture every five years does a report titled the “Census of Agriculture.” The most recent came out in 2017.

It revealed that farmland – the kind pheasants need – is disappearing. Farmland nationwide shrank another 2 percent over 2012.

Some of the biggest losses, percentage-wise, occurred in the Northeast.

So it’s no surprise that, outside of hotbeds like Kansas, Iowa, North and South Dakota, Nebraska and Minnesota, pheasant hunting is becoming more challenging all the time. In some states it’s been reduced solely to chasing stocked birds.

Even that can still be fun, though.

And it’s getting underway right now.

Wildlife agencies have already released birds in spots. They’ll go out in waves hereafter, through December in cases, to coincide with hunting season that run through year’s end or later.

Want to get in on the action? Following these six tips just might put you on more birds.

Hunt where the birds are

But there was a time when wildlife agencies – fearing accidents in the face of high hunting pressure – threw a veil over stocking specifics.

No longer. Small game hunters are too few, and pen-raised birds too expensive, for that anymore.

Now, wildlife agencies in states like Pennsylvania, New York and Massachusetts, to name a few, detail which lands get birds, when and, often, how many. Stockings locations are often mapped out.

Use that information to your advantage.

Not all pheasant releases are created equal. Generally speaking, those early in the season tend to be larger, to accommodate hunters chomping to hunt in October’s comparatively wonderful weather.

Yes, the competition will be high. According to Pheasants Forever, even states flush with wild birds see three quarters of their hunting pressure in the first half of the season.

And those guys and gals kill a lot of birds. In Iowa, according to some estimates, 30 to 50 percent of the entire season’s harvest occurs on opening weekend.

So get out there while the birds are, too.

By nature, pheasants – even pen-raised ones – seek out thicker cover. Think wetlands, thickets and swamps.

Being prey for so many other critters has ingrained that into their DNA.

So, when hunting them – especially if you are afield without a dog – forego walking through open fields to bust the brush. Walk the thick, nasty cover that often surrounds them instead.

Be sure, too, to check out edges like hedgerows, ditches, weedy fence lines and powerline cuts.

Those are all places are where birds, especially those that survive the first wave of hunters, like to hang out.

This is especially important if you are hunting without a dog.

Pheasants don’t like to flush and fly from danger unless absolutely necessary. Their preference is to sit tight and let danger pass.

Hunters who walk through good cover – which may have birds in it – too quickly pass right by pheasants without knowing they are there.

So meander. Take a few steps this way, then that. Stop periodically and remain still for a few moments, always on alert.

Often, pheasants that in reality are unknown to hunters convince themselves otherwise and flush to get away, presenting a shot.

Slow and steady really does win the race.

Oftentimes, the majority of hunters who chase pheasants at a particular location do so in predictable ways.

They all park in the same lots, enter fields from the same direction, work themselves and their dogs in the same zigzag grid patterns. So mixing things up can pay dividends.

Park somewhere new and be quiet about things like closing truck doors, so as not to alert birds to your presence. Consider walking into fields from unusual angles, even if that means having to circle around a bit to get started.

Or, if you’re hunting with a friend or two, post one or two where everyone else starts and drive birds toward them from the opposite direction.

This applies in two ways.

First, the last hour or so of a day is often prime pheasant hunting time. Birds that were feeding will make their way back to cover for the night, potentially exposing themselves.

So hunt when they figure to be active.

Wildlife agencies often release birds around the Christmas holidays, when hunters – and especially kids – are off work and school. They supplement the hardiest or wisest birds that remain from earlier in the season.

The one thing largely missing then is other hunters. Once big game seasons start, and especially after they’re over, a lot of hunters pack away their shotguns for the year. That’s a mistake.

Some pretty good hunting remains to be had.

One last, and unusual, tip on hunting pheasants

Now here’s one piece of advice you don’t necessarily expect when talking about pheasant hunting: watch for grizzlies.

But officials with Montana Fish, Parks and Wildlife are warning bird hunters to be on the lookout for the big bruins. Grizzly bears now roam places they haven’t in decades, meaning away from mountains and into the prairies. They often haunt the same places as bird hunters.

“What puts bears in potential conflict with bird hunters this time of year is their search for food in anticipation of winter hibernation. Grizzlies often follow streams and river bottoms that offer shade, protection and food. These are the same places hunters target for birds,” the commission said.

Mike Madel, the commission’s bear management specialist, said two recent snowstorms eliminated a lot of the bears’ natural foods, sending them to where the bird hunters are.

He advises pheasant hunters to avoid areas with fresh bears sign, hunt with a partner, watch their dogs, carry bear spray and be ready to use it, and make noise when hunting so as to avoid surprising any bears. Unexpected encounters like that most often lead to attacks, he noted.

It’s all timely advice, as already this year a grizzly – the same or more than one – attacked four hunters in Montana. All survived.

But Montana officials are urging hunters not to run or yell if they see a grizzly. That can provoke an attack, they noted.