Compared to the cost of a rifle itself and optics you mount on it, scope rings are fairly inexpensive. But to get the most from your firearm, you still need to get the right ones. That refers not to brand but height. Rings usually come in low, mid and high varieties. Which is right for you? To figure that out, put a set of rings on your rifle, then mount the gun to your shoulder. But – and this is the trick – raise it up with your eyes closed. Open them only when you have the rifle in position. If you’re looking at the bottom of the ring bases, they’re too high and you need to switch to lower ones. If you’re looking over top of them, they’re too low and you need taller ones. Staring straight down the middle? Then you’re good to go. 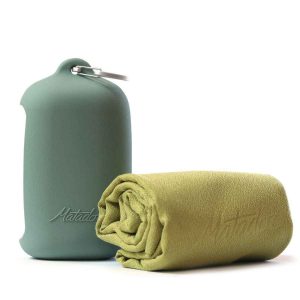 Product description: That oversized fluffy bath towel you love to luxuriate in after a hot shower? It’s great for home, but not so practical to carry in your kayak, backpack or even in the car. In those situations, you want something that’s just as absorbent, but takes up less space. Enter the large NanoDry towel. Unfolded, it’s two feet by four feet, yet weighs just 5 ounces. Best yet, made of a nanofiber material, it soaks up 2.3 times its own weight in water. It’s quick drying, machine washable and has an antimicrobial coating to prevent mildew. A snap loop on the towel allows you to hang it up – at home or from a branch in the woods – to dry.

Available options: This is available in two colors, a black case with a charcoal towel and a blue case with a moss green towel.

Notable: When you’re not using it, the NanoDry folds up to fit inside a silicone storage case. With its attached caribiner, it’s easy to carry wherever you go.

For something with the word “backyard” in its name, this is an amazingly global event.

The 2020 version of the “Great Backyard Bird Count” is set for Feb. 14-17. Administered by the National Audubon Society and Cornell Lab of Ornithology, it’s an attempt to get people to look for, identify and report the birds they see in their own communities.

According to those two entities, each observation serves the same goals: to see how birds are doing and what, if any, habitat protections might be in order to sustain them.

That’s more than half the known bird varieties in the world.
Birders of all levels can participate in the count by visiting the Backyard Bird Count site. There’s all kinds of cool information on there, too, about trends in bird sightings, so you can see how your observations compare with those from around the nation and world.

Check this out, too: Wildlife watching, fishing, hunting all powerful economic forces