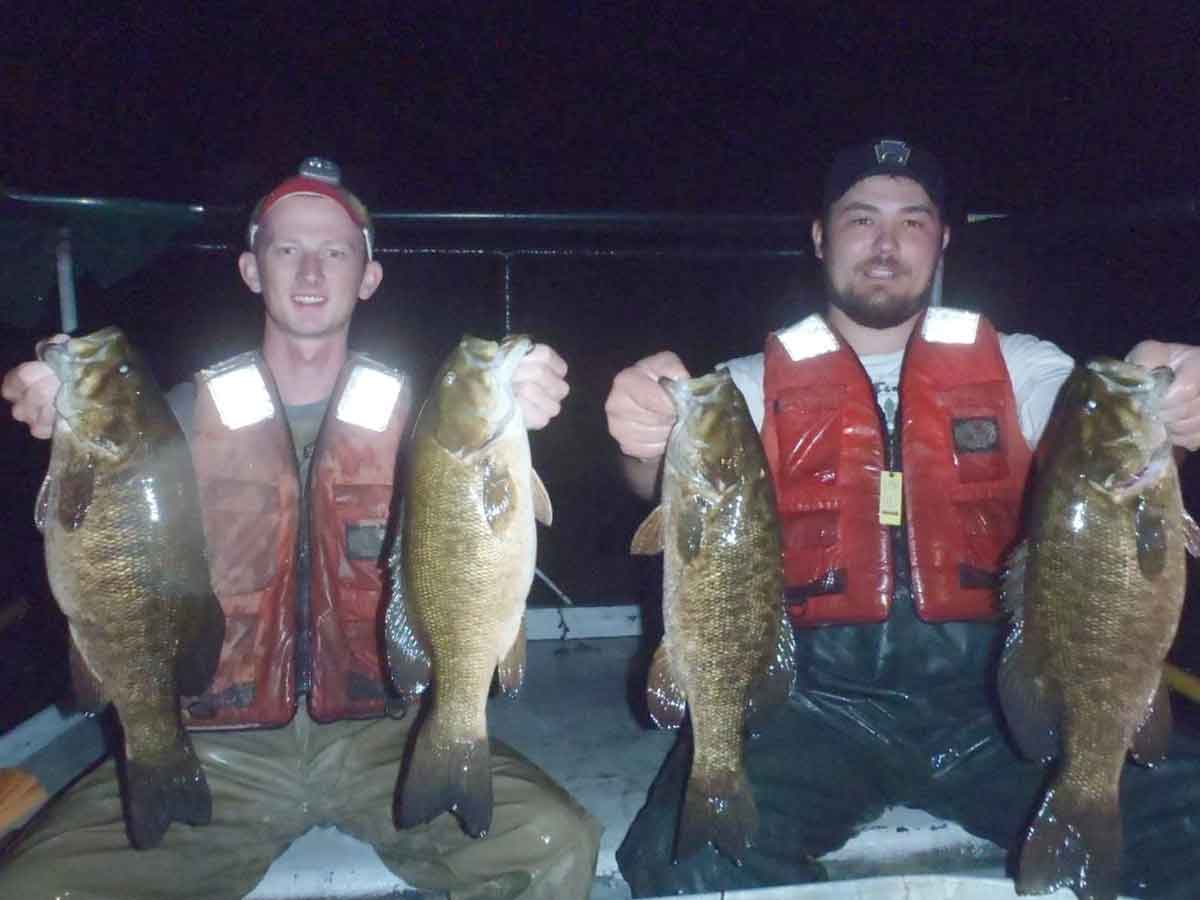 Each year between 2015 and 2018, Pennsylvania Fish and Boat Commission biologists examined smallmouth bass populations at four sites on the Allegheny River. They use nighttime electrofishing equipment to catch, measure and release fish.

They did the work in August and September.

That’s a continuation of a long-term effort. Biologists have sampled Allegheny smallmouths for the better part of three decades now. 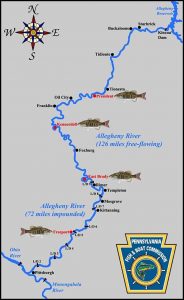 They use the same sites each time — President, Kennerdell, East Brady and Freeport – so as to be able to compare things over time.

President is the northernmost of those sites; Freeport the one furthest downriver.

That’s a lot of fish spread over a lot of water, said biologist Mike Depew of the commission’s area 8 office in Somerset.

Some spots are of course better than others, though.

“Over the past 30 years, (commission) biologists have found that catch rates of legal-length smallmouth bass are typically much greater at free flowing sites than impounded ones,” Depew said.

Freeport is impounded by a dam. East Brady is sort of a transition area, with characteristics of a free flowing river in its upstream reaches, but those of an impoundment in its lower end.

But the river in President and Kennerdell flows unobstructed. And both have “excellent habitat in the form of big boulders that smallmouth bass prefer,” Depew said.

Not surprisingly, those two stretches also hold the most and biggest smallmouth bass.

Biologists measure catches in a couple of ways.

First, they look at catch of smallmouth bass per hour. President and Kennerdell, in that order, are tops here.

By comparison, biologists caught 66 fish per hour at Freeport and 33 at East Brady.

Second, biologists count the number of “trophy,” “memorable” and “preferred” smallmouths. Trophy fish are those exceeding 20 inches. Memorable ones stretch 17 to 20, while preferred go 14 to 17.

Really monster smallmouths, those trophy fish, are rare. Biologists only got five in four years total.

But four came from President. The other showed up in Freeport.

Memorable smallmouths are more common. Biologists collected 112 of those.

They got 58 at the President site, another 35 at Kennerdell. Combined., that’s 83 percent of the total.

The best news is that the is fishing is really good right now, with one exception. 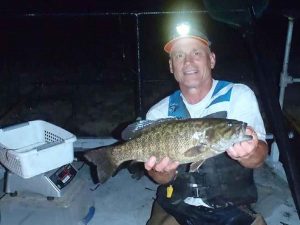 “However, catch rates rebounded in 2018 to a record high for fish over 12 inches and to the second highest catch rate for fish over 15 inches, indicating good bass fishing opportunities are present at President.”

At Kennerdell, catch rates in 2016 and 2017 exceeded the long-term average, with the number of fish longer than 15 inches the highest ever recorded in 2018.

Freeport, meanwhile, produced better-than-average numbers of smallmouth bass longer than 12 inches every year but one since 2011, “indicating good fishing opportunities have been and continue to be available here,” Depew said.

The story isn’t quite so rosy at East Brady. Biologists have struggled to get fish there recently.

“Although catch rates are rarely as high as at the other two free-flowing sites, numbers of 12- and 15-inch fish have been lower than the median for the past few years,” Depew said.

That can change. The situation at sites can vary from year to year, based on the survival of year classes of fish, Depew said.

So crews will be back on the river later this summer documenting what’s going on again.

But overall, he called the Allegheny prime smallmouth bass fishing water. And anglers might want to get busy fishing it.

Next week: A look at a couple of inland walleye lakes.