Accessible Hunter creator inspires others to get back into the woods 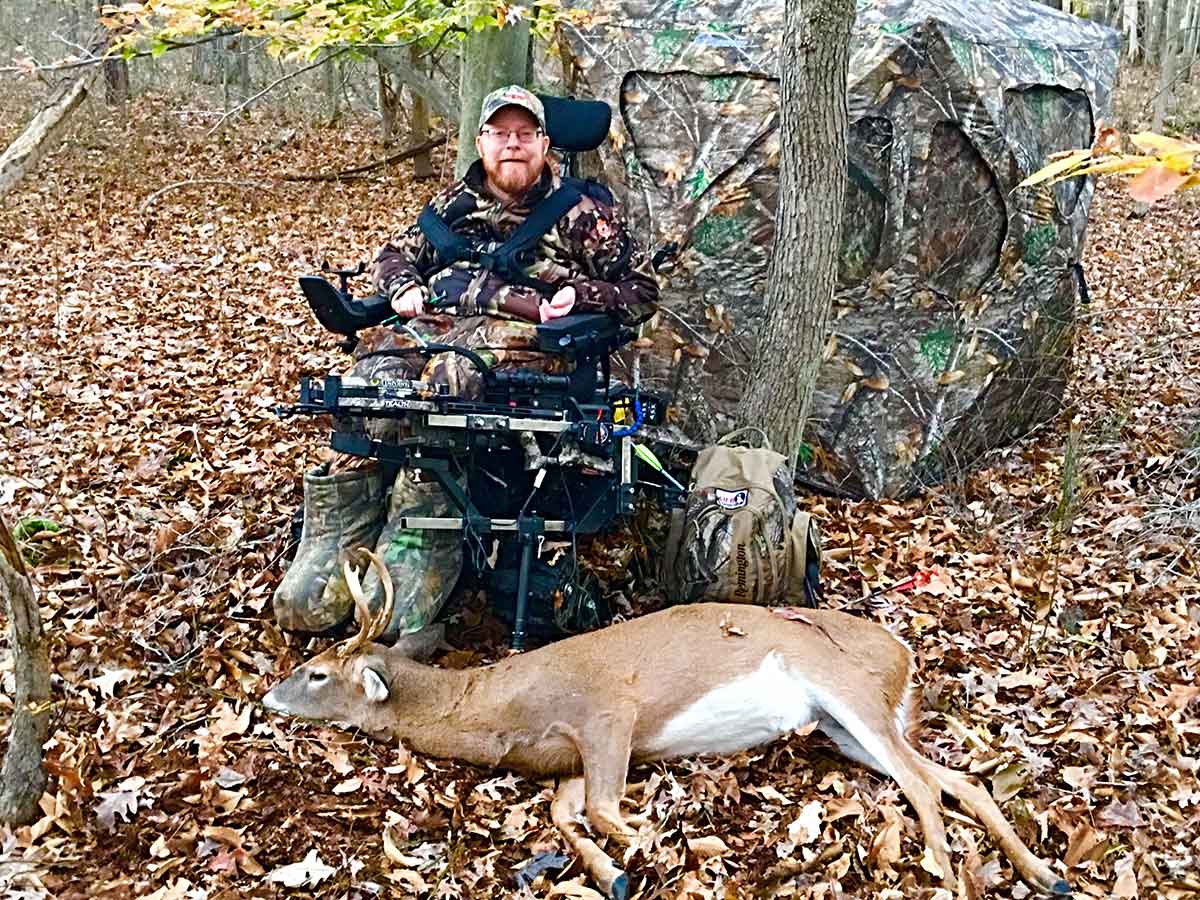 Greg Traynor hunts from a wheelchair equipped with tank-like treads.

It was for Greg Traynor a moment of revelation.

It was autumn, his favorite time of year. And he was in the woods, archery hunting, his most cherished outdoor activity among many.

The sun was shining on his face, the leaves were a fiery mix of reds and golds and oranges, turkeys and squirrels and birds bustled about. In a few moments, a white-tailed doe would appear, and he’d take it with one clean, perfectly-placed shot from his crossbow.

“I don’t think there’s anything better than being in the woods in October. And that whole setting, that whole scene, right then and there, it was perfect,” said Traynor, of Canonsburg in western Pennsylvania.

“I was just so in the moment.”

That he could be so joyful, so at peace, might surprise some.

Traynor, who just turned 52 – his birthday falling on opening day of Pennsylvania’s statewide archery deer season, fittingly enough – started hunting at 12, and archery hunting at 15. But he never expected to live this long, or to still be doing what he’s most passionate about.

Not after his accident, anyway.

It happened in 1999. Traynor was living near Cape Cod. He and a couple of friends were swimming in a small lake.

A former skydiver, martial arts practitioner, fencer and dirt bike rider as well as a hunter, Traynor was standing in waist-deep water when he dove forward. He smacked his face off the sandy bottom.

“If you were going to get hurt,” he said, “you would think that it would be doing something that was a little bit of a risky activity. I never thought I’d get hurt diving from a standing position.

“It was just one of those freak things.”

Aware immediately that something was drastically wrong – he couldn’t move when he floated to the surface – Traynor was helicoptered to a local hospital. He’d broken his neck at what’s called the C4/5 level.

That’s among the most severe of spinal cord injuries.

He spent weeks there, in an induced coma, before moving on to Shepherd Center, an Atlanta rehabilitation center.

Doctors told him he’d never walk again. Only time would tell if he’d ever regain use of his arms. 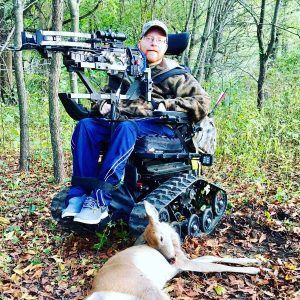 Greg Traynor is the man behind the Accessible Hunter Facebook page.

He didn’t, not to any degree. Traynor is a quadriplegic, in a wheelchair, paralyzed from the biceps down. He can move his arms, but not control them well or grasp anything with his hands.

Meanwhile, he endures constant neuropathic pain, struggles with diminished lung capacity and deals with dysreflexia, or sudden surges in high blood pressure. He relies largely on family and friends to help him with daily living tasks.

But, at Shepherd – even while he was still on a ventilator – therapists took him to their gymnasium to shoot an air rifle using a hand crank known as a BMF Trigger Activator.

And his life began to change again, if not overnight.

Developing any level of strength took years. So, too, did getting past the inevitable depression resulting from his injury.

“It was a slow process, both physically and mentally,” Traynor admits. “It took a long time to get back to where I even wanted to go hunting again.

“But shooting at Shepherd, that always stayed in my mind, that you can still go hunting, you can still shoot, you just have to do it a different way.”

So 10 years ago this fall, Traynor headed back to the woods. He bought a crossbow, developed a rest for it and attached his trigger activator.

With the help of Whitetail Associates, a group of hunters pursuing deer in Allegheny County parks, he killed a 9-point buck and a doe on the same day.

“And that just kind of sealed the deal for me, that I was back hunting. I’ve never really looked back. It’s been awesome from day one,” Traynor said.

His goal since has been to help others experience that.

The relentlessly cheerful Traynor – fond of saying “it’s going to be a great day” — started his own website, AccessibleHunter.com. There, and on his Accessible Hunter Facebook page, he shares information on equipment, answers questions and posts photos of and from hunters like himself.

He talks to people all over the world, telling them all, “no matter how you get there, get there.”

He’s an inspiration, said Ricky Mills of central New York state. He’s a 20-year veteran of the military who did multiple combat tours around the globe as a Green Beret.

He returned stateside to North Carolina in 2006. The following spring, while he was riding his bike home from work as a way of training, a car struck him from behind at 60 miles per hour.

“My first bike ride, a 35-mile ride, I made it maybe, well, I don’t know how far. I don’t even remember getting on my bike that day,” Mills said.

He suffered a fractured skull, broke six ribs, an elbow and a leg, and had blood and air in his lungs. Doctors said he died on the side of the road.

Doctors saved him, and he’s able to walk. But he suffers “ridiculous” pan every day and can’t stand or sit for more than a few minutes at a time.

He never asked “why me,” he said. But while learning to live again, a friend and fellow ex-Ranger dealing with his own injuries introduced him to Traynor.

It was a wakeup call, he said.

“When I met Greg the first time, I kind of took a step back. I saw I could be Greg, in a wheelchair, a paraplegic, partial use of my arms,” Mills said.

They bonded over hunting.

Mills started his own company, Wild Jaeger, representing American manufacturers like Remington, Barnes Bullets, Camillus Knives and others in Europe. Traynor helped, he said, serving as a pro staffer, but also just by modeling courage and perseverance.

“There need to be more people like Greg Traynor in this world,” Mills said

For his part, Traynor spreads lots of thanks around.

He’s played a big role in his return to the woods, developing the mount that holds his rifle, shotgun and crossbow, for example. Traynor offered feedback to the company that made his TracFab hunting wheelchair, too, so that it not only can go through mud and snow using its tank-like tracks, but also fit through hotel doors.

But he couldn’t use any of it without help from family and friends who get him to the woods, he said.

He’s grateful for them, and thankful to be back out there, hunting again. And he wants others to know they can be, too.

“Getting out in the outdoors, that’s my best therapy. I think if you just get outside and try to make the most of things you’re a lot happier in general,” he said.

More on the Accessible Hunter

Why is this such a big deal?

Well, there’s no shortage of mobility-challenged hunters who would like to get back into the woods, it seems.

The National Wild Turkey Federation, for example, runs a Wheelin Sportsmen program. It aims at “providing people with disabilities opportunities to enjoy the outdoors.” It’s been around since 2000.

Hunters can visit the Federation’s website and search for events by state. The list is constantly being updated, Carol said, so it pays to check it often.

At the same time, Ricky Mills runs veteran hunts through Wild Jeager, so hunters can reach out there. Greg Traynor invites them to contact him via Facebook, too, for any help he can offer.

See also: A seismic change may be occuring in the whitetail woods