A twist on Leave No Trace and more outdoor news

Anyone who camps, especially off the beaten path, has heard it: practice “leave no trace” principles. That implies getting to a spot, doing your thing, then leaving in such a way that no one ever knows you were there. But the reality is, some well-known, popular, long-standing campsites are already hammered. Think of those on river islands or river banks, for example. They’re often trampled, packed down, bare dirt affairs. In such situations, it’s often best to make use of them. Don’t make them any worse certainly. Pack out all that you pack in, and maybe a bit more if the people there before you weren’t overly conscientious. But use them so as to minimize impacts on the surrounding countryside. 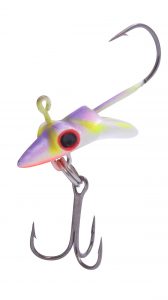 Technique: Jigging a bit of live bait – a minnow or grub – or a soft plastic beneath a jig is an ice fishing staple. This jig puts a twist on that, though. Its shape allows it to dart in a semicircle. It functions almost like a swimbait that way, darting horizontally, side to side, with every move of the rod tip, and rocking subtly when the rod tip stops. And the larger the bait added on, the further and more the jig glides. Let it fall on a slack line if using a plastic bait, a taut one if using live bait. Just remember, this lure isn’t for hard water only. You can get fish in open water by casting it and retrieving it with a lift-fall action. Fish it in the large size for walleyes, the smaller one for panfish.

Notable: Visit the Northland Tackle website (https://shop.northlandtackle.com/jigs/uv-forage-minnow-dart/) and you can watch a good video explaining the difference between “glo” lures and “ultraviolet” lures.

The lifespan of a rabbit in the wild is generally considered to be about one year, maybe two at the outside. So they’ve got to make lots of babies, and fast, to perpetuate their kind.

That’s not necessarily unusual. Lots of species, from pheasants to small mammals like mice, come into this world and leave it with amazing speed.

But some other species survive longer than that. White-tailed deer, for example, live about 4.5 years, on average, according to some research, though they have the potential to go much longer. Black bears, by comparison, often live to almost 20 years old.

That still leaves them far from the top of the wildlife age mountain, though.

Scientists have recorded Eastern box turtles living 138 years, while lake sturgeon can live 150 years or longer. There are whales thought to have lived more than 200 years, and Greenland sharks nearly 400.

Check this out: Great horned owl makes most of winter